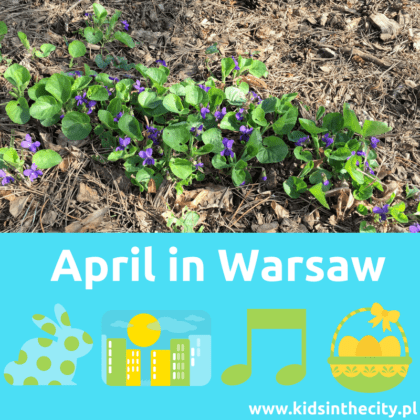 Palm Sunday (Niedziela Palmowa)
It starts the Easter celebrations. There are processions around the church to commemorate the day Jesus entered Jerusalem. People bring „palms” made of paper flowers, dried flowers, and twigs

Good Friday (Wielki Piątek)
Good Friday commemorates passion and crucifixion of Jesus. In Warsaw and other cities, there are processions on the streets – people carrying the huge cross and contemplating passion of Jesus. In Poland, for many people, it’s a day of fasting – no meat, no parties, no alcohol

Easter Monday (Poniedziałek Wielkanocny)
Bank holiday. Śmigus dyngus – an old tradition in which people use buckets (kids usually play with water guns) to soak each other with water. It’s safe to stay home and avoid water fights;) Another Easter Monday tradition is to beat legs with willow branch or Palms (the ones used for Palm Sunday)

Anniversary of the Warsaw Ghetto Uprising (1943)
The major celebrations of the anniversary of the uprising in the Jewish ghetto in Nazi-occupied Warsaw are held at the Monument to the Ghetto Heroes and POLIN museum. You may notice in Warsaw daffodils (żonkile) symbolizing the Uprising (Marek Edelman, the last leader of the Uprising, before his death in 2009, used to receive daffodils from an anonymous person every anniversary)

Friday – many people will leave Warsaw for a so-called long May weekend
You can expect big traffic jams;)