Public holidays and dates to remember in Poland in September, October & November 2019 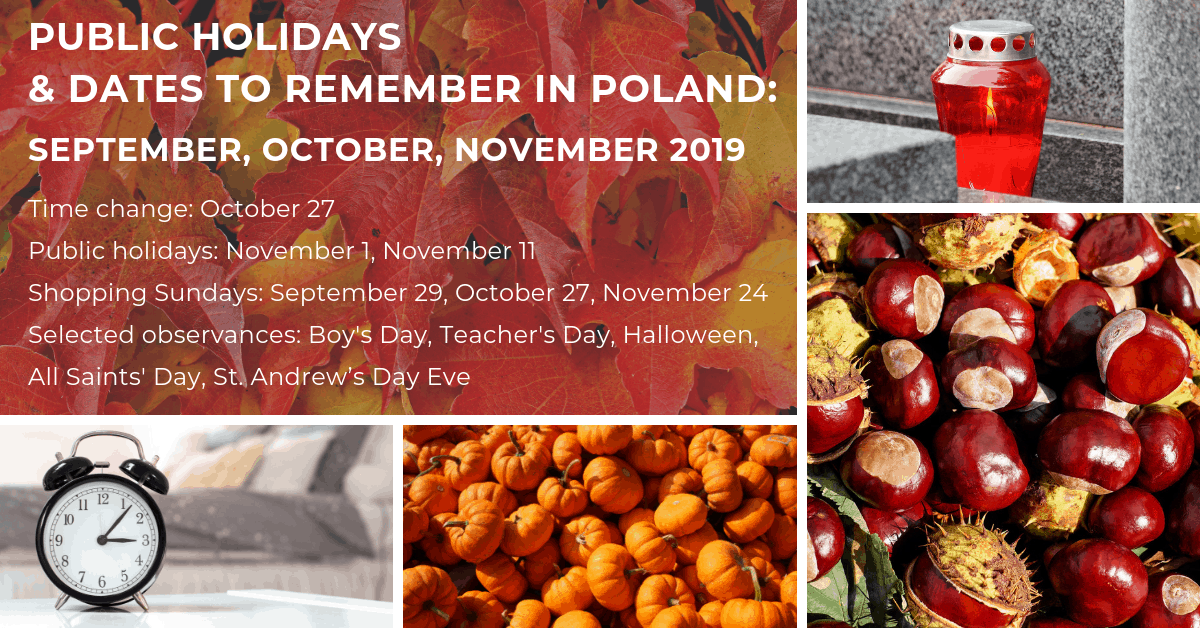 Boy’s Day (Dzień Chłopaka)
This holiday in Poland is the equivalent of Women’s Day, which is celebrated in Poland on March 8. On Boy’s Day, ladies give their loved ones (younger and older) a gift or prepare another surprise.

Teachers’ Day in Poland (Dzień Nauczyciela)
In Polish schools, there are no regular classes on this day. Students give teachers flowers and/or other gifts. Usually, there is the inauguration event for first-grade students (called in Polish ślubowanie) and older kids either do not go to school or have some fun activities.

Time change (zmiana czasu)
On Sunday night, October 27, at 03:00 am clocks are turned backward 1 hour to 02:00 am. The last time change in Poland (and in other European Union countries) will happen in 2021. The European Union lawmakers decided to end the twice-a-year (March and October) custom of time changes throughout the European Union, leaving member states the freedom to decide their standard time. The national governments have yet to take a stance –  countries that decide to be permanently on summertime would change their clocks for the final time in March 2021, countries that opt to be on wintertime would change their clocks for the final time in October 2021.

Halloween
Halloween celebrations are relatively new in Poland. A few years ago, it was almost impossible to buy a pumpkin this time of year in Poland! Now pumpkin carving and pumpkin decorations are more and more popular at Polish schools and homes. In bars and restaurants in Poland, there are themed Halloween parties for adults and costume parties for kids at schools. More and more children in Poland dress up in costumes for Halloween and travel from house to house playing trick or treat (in Polish: cukierek albo psikus).

A public/bank holiday in Poland – All Saints’ Day (Wszystkich Świętych)
It’s a Christian holiday. In Poland, it’s also called the Day of the Dead (Święto Zmarłych) and is deeply rooted in the Polish tradition – the holiday is observed by many people in Poland, regardless of their faith and beliefs. People visit cemeteries to light candles and lay flowers on the graves of their family and friends. Often they travel long distances, in general, there is increased traffic, especially close to the biggest cemeteries. November 1 is a non-working day in Poland – schools, public institutions, most businesses and stores are closed. Shopping on November 1: stores, malls, shopping centers are closed, only some smaller local convenience stores can be open (eg. Żabka). You can always do basic shopping at gas stations (which are open 24/7).

A public/bank holiday in Poland – Independence Day (Święto Niepodległości)
The anniversary of the restoration of Poland’s independence in 1918. After 123 years (from the end of the 18th century until the end of World War I) of partitions by Austria, Russia, and Prussia Poland regained its independence. The national celebrations are usually held in Warsaw, at Piłsudski Square, at the Tomb of the Unknown Soldier, with the participation of the President of Poland, other leaders and officials, and representatives of the Polish Armed Forces.

St. Andrew’s Day Eve (Andrzejki)
It was believed that the night of November 29 and November 30 is suitable for magic and single girls can see their future (and their future husbands). Nowadays, it’s an opportunity for big parties and a night for future telling games. The classic one is to pour hot liquid wax through a keyhole into cold water. After the wax is solidified, the shape and its shadow illuminated on the wall determines your future. The fun is to interpret the shape. Another tradition is a shoe game. Participants take off one shoe, the shoes are lined one after the other from the wall of the room to the door. The owner of the shoe that reaches the door first is the first to get married:)

Read more about the weather, changes in nature, seasonal fruits and vegetables in Poland in September, October & November.

Subscribe to our monthly newsletters in English to explore Poland and to learn about Poland! Once a month you will receive a Newsletter: ‘Explore Poland with Kids‘. You will find there featured family-friendly destinations in Poland, handpicked events in selected Polish cities (that may inspire you for a family city break in Poland), dates to remember and things to do in Poland in a given month: 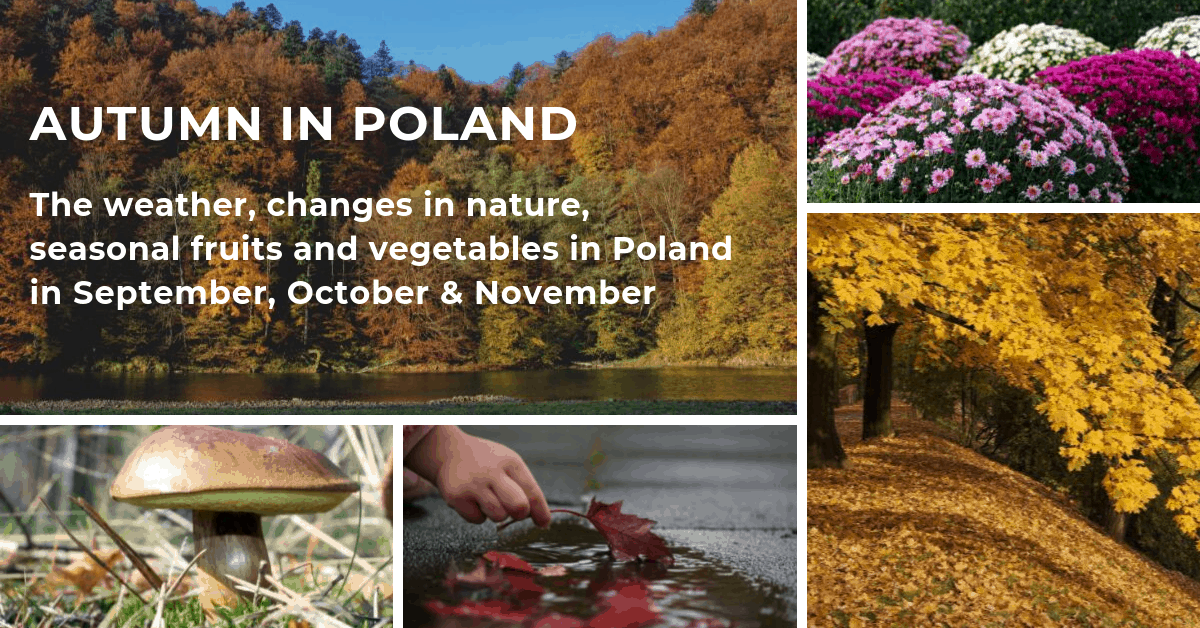 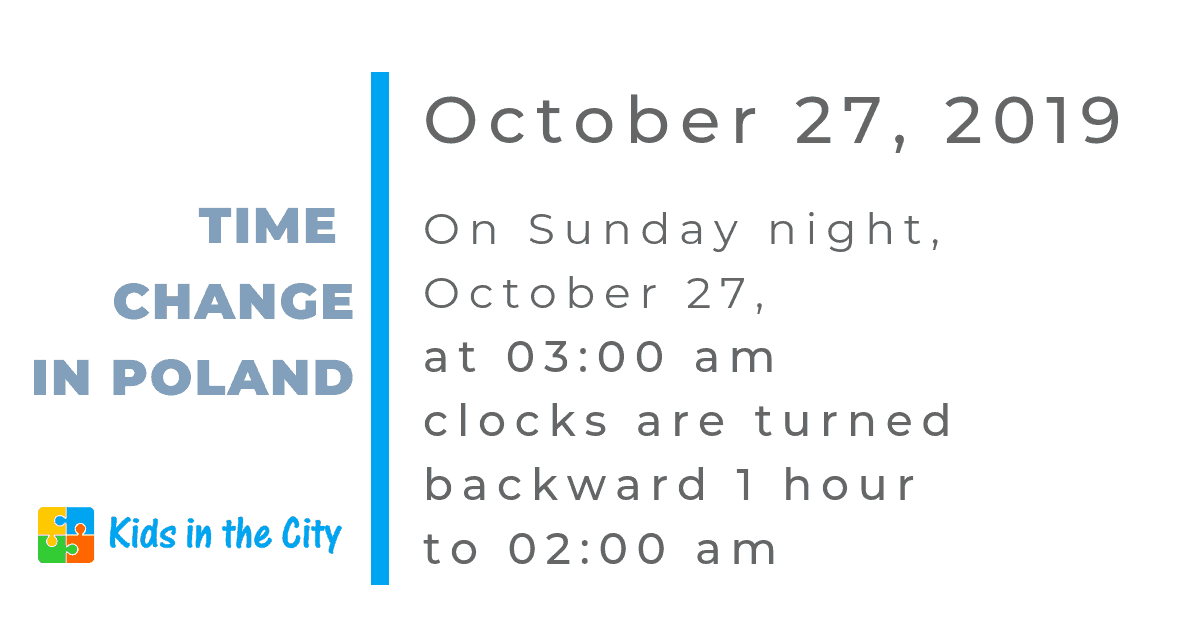