Most beautiful castles to visit in Poland

Visiting castles is like diving into Polish history – return to the past of kings, wars, alliances. They are the perfect background for photos and souvenirs from travels around Poland, but they can also be a living history lesson. Here fantasy novels get real, often taking us back to the Middle Ages. Sometimes they bring a thrill, sometimes they are romantic, sometimes they make you reflect, but for kids… it’s always great fun!

The Castle of the Teutonic Order in Malbork 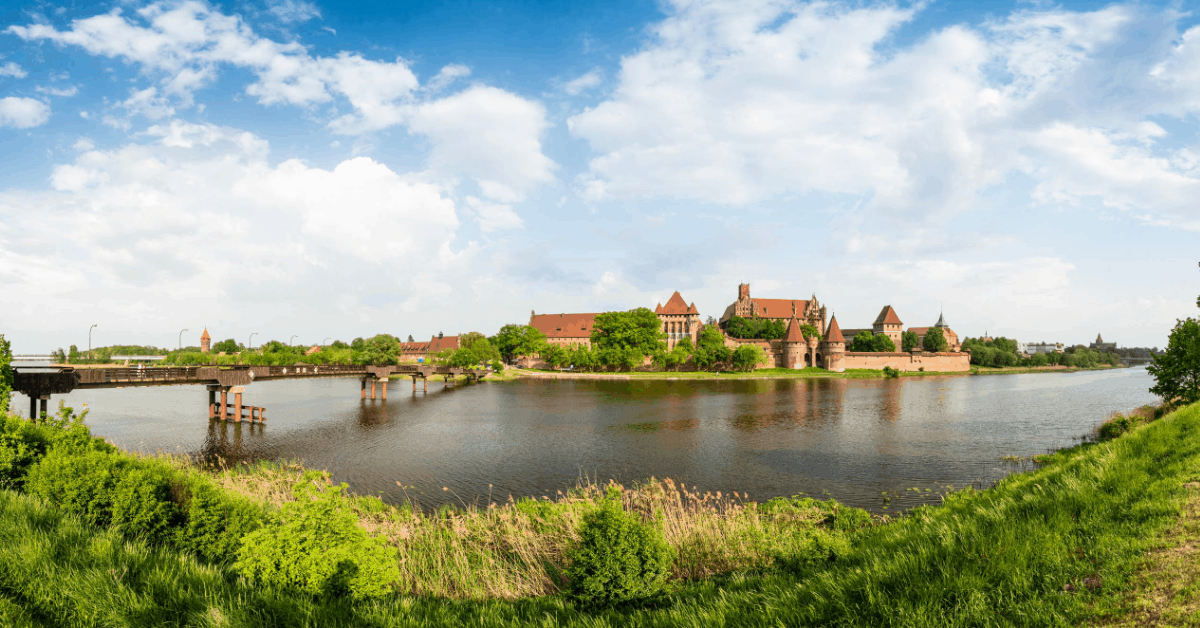 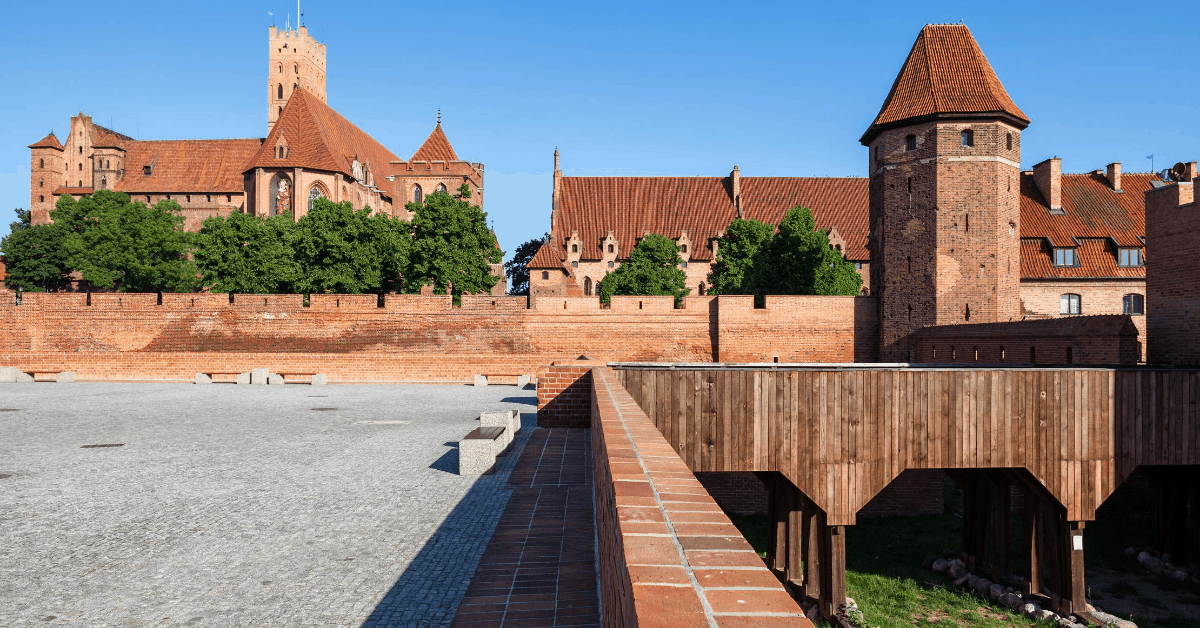 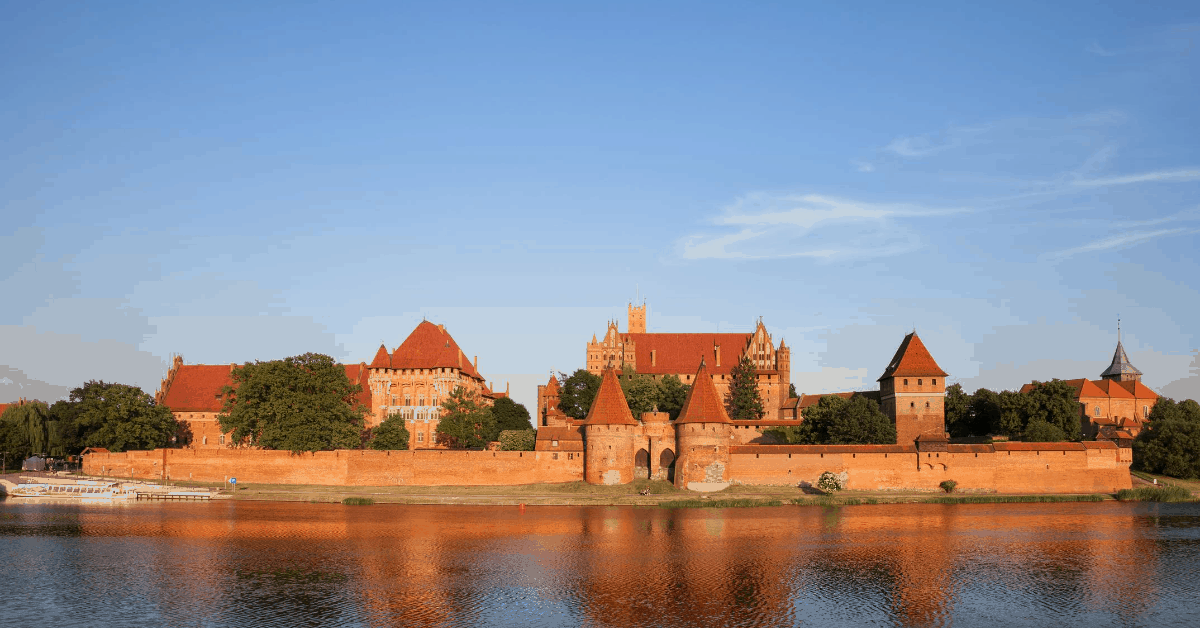 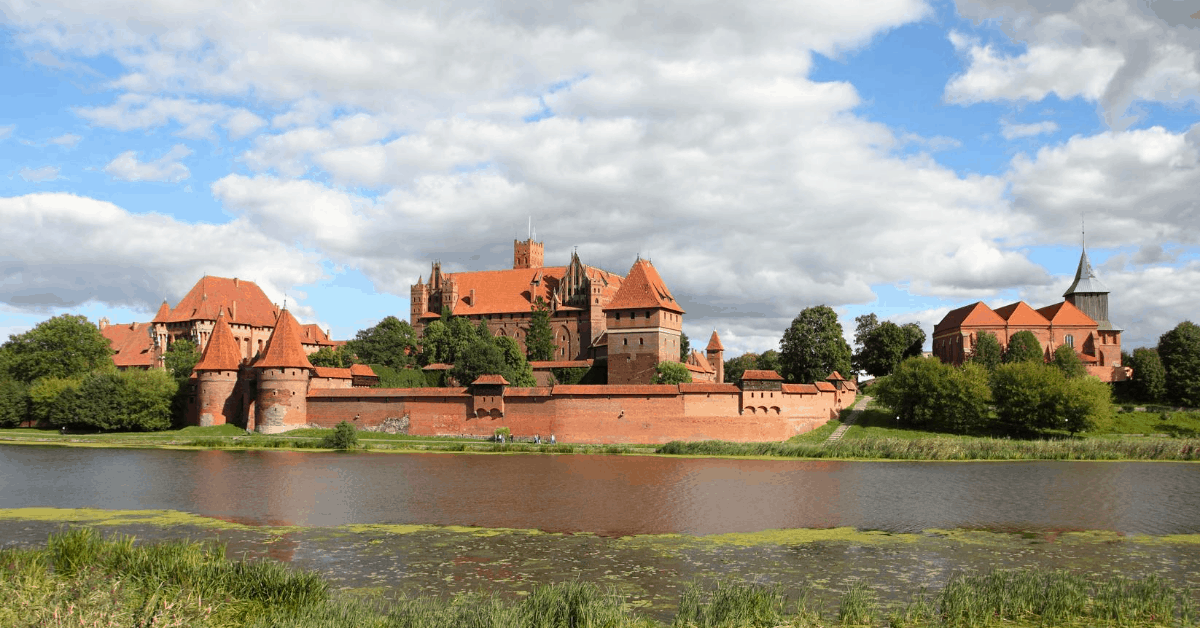 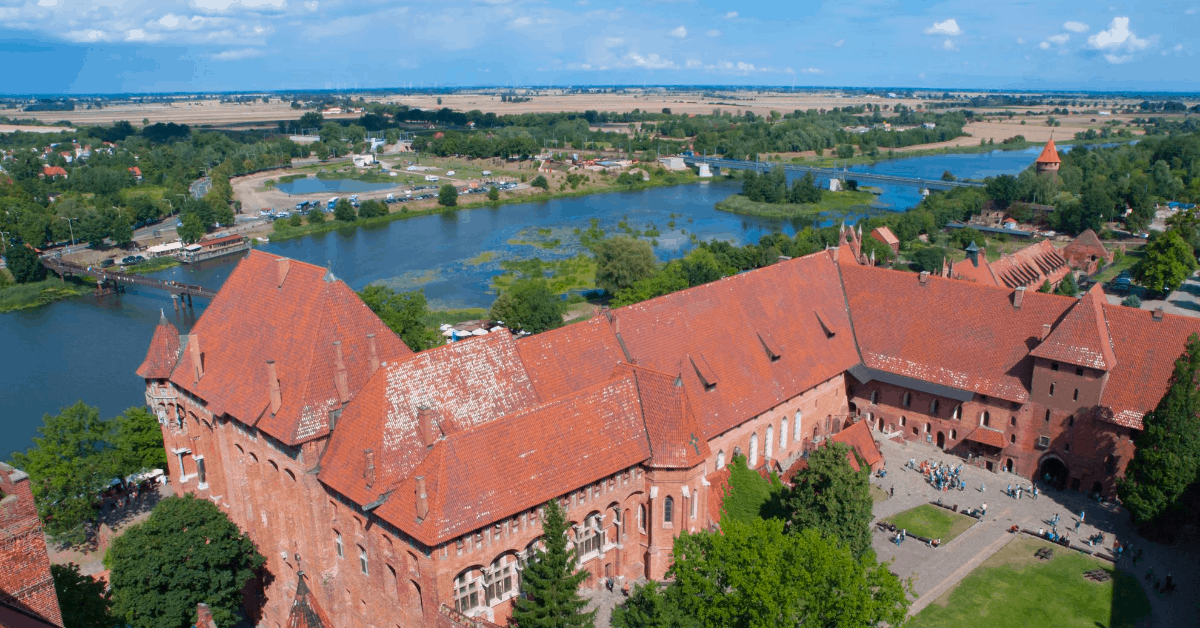 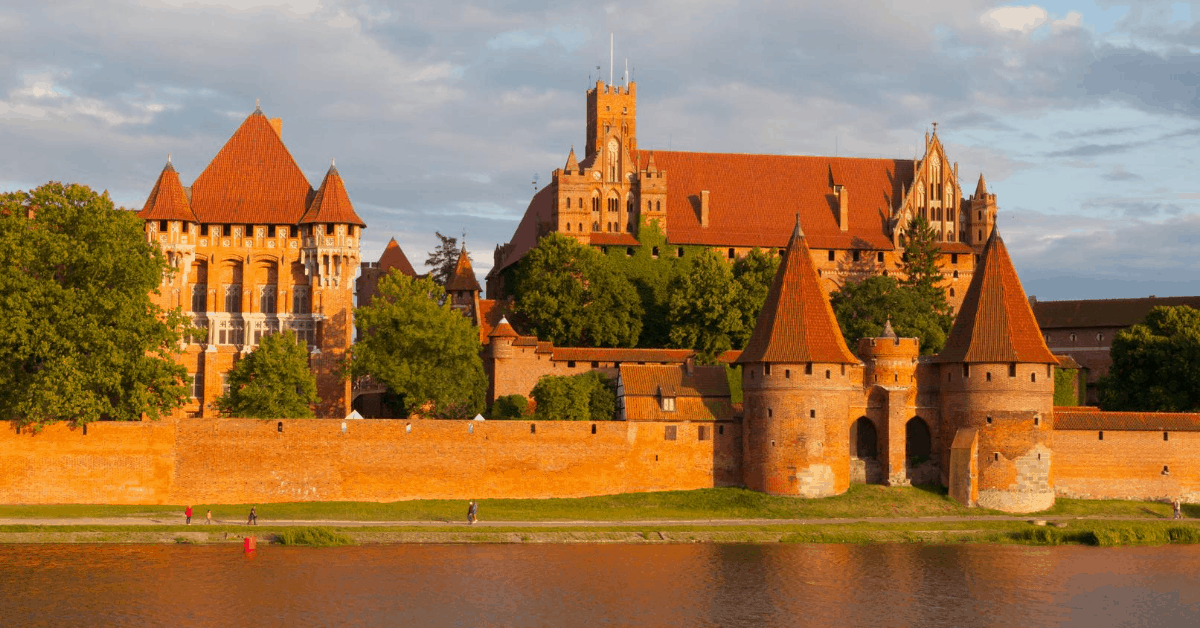 Malbork Castle is one of the most magnificent medieval fortresses in Europe, called by many the biggest castles in the world. Built in the 13th century, restored after the Second World War, it’s a UNESCO World Heritage Site (“It is the most complete and elaborate example of a Gothic brick-built castle complex in the characteristic and unique style of the Teutonic Order”; more on the UNESCO website.) 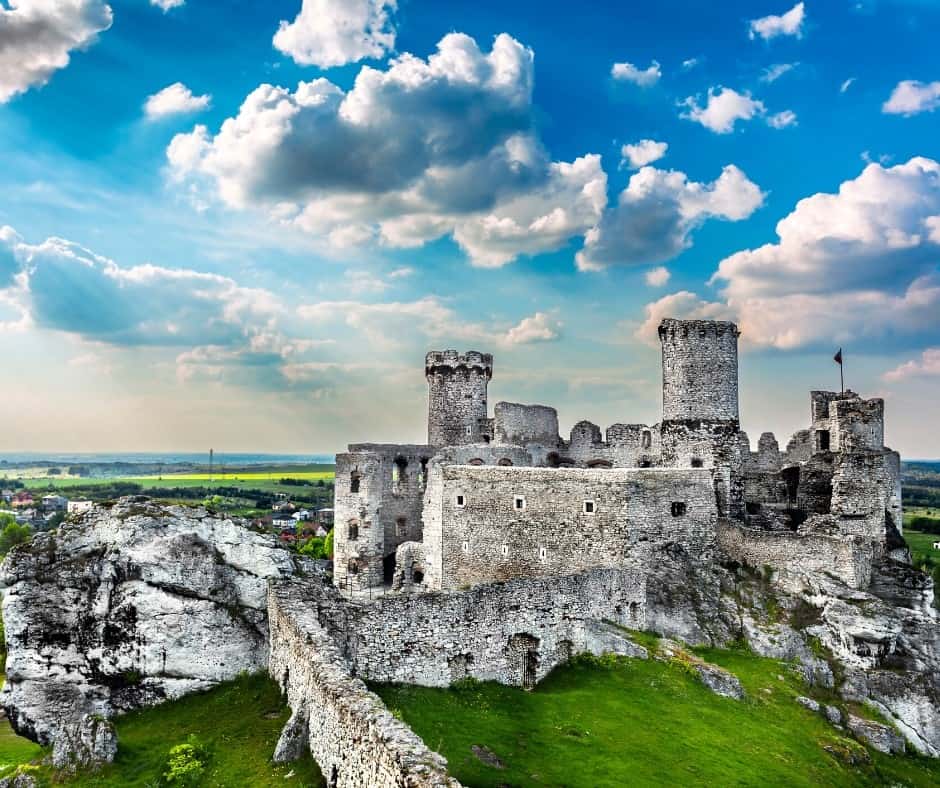 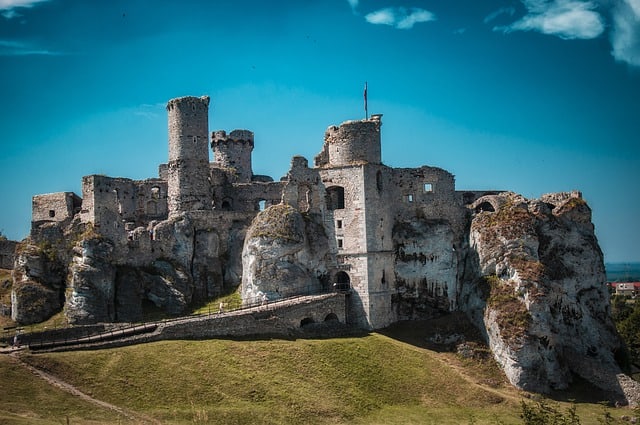 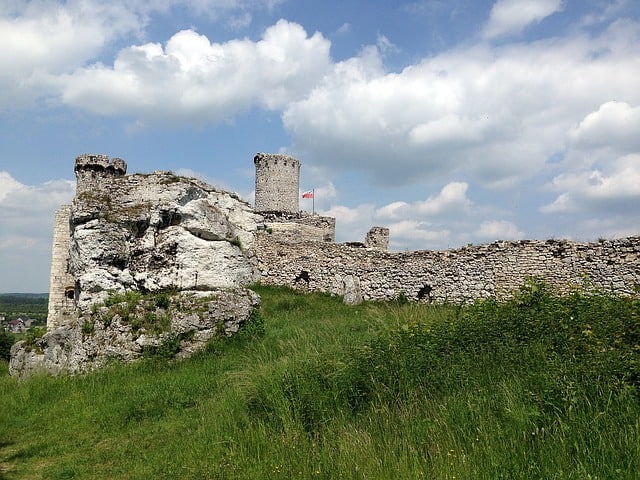 This very photogenic castle (the majestic ruins are enhanced by the rocks used to build the walls of the castle) was built in the 14th – 15th centuries and is available for tours, including small exhibition rooms – torture room (!), armory, and history of the castle. “Across the street”, there is an amusement park (including a miniature park, toboggan run, experiments park, “the house of legends and terrors”) and on the other side, 300 m from the castle, there is a hotel with a swimming pool, set into the rocky and green surroundings (POZIOM 511 Design Hotel & SPA). 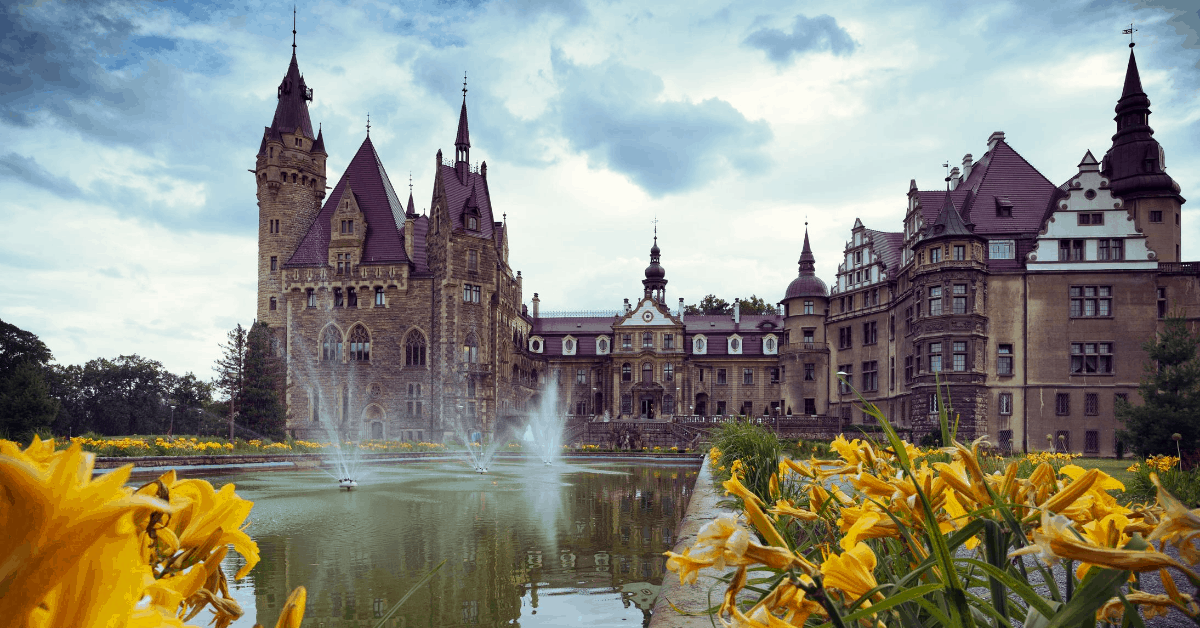 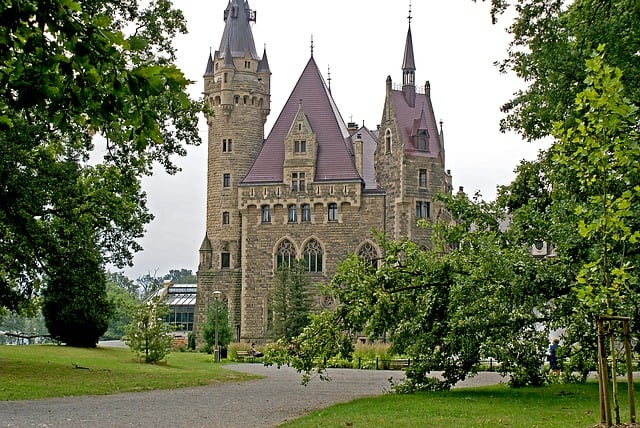 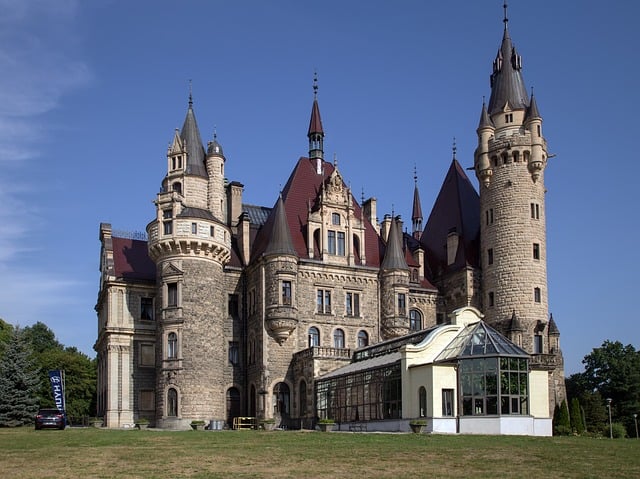 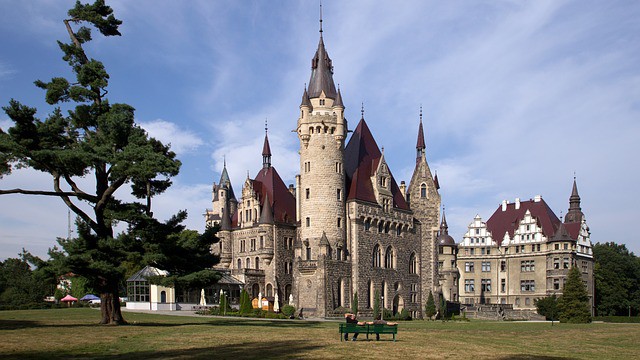 The history of the palace dates back to the 18th century, the present building is a combination of neo-gothic and neo-renaissance styles, from the turn of the 19th and 20th centuries. This fairy-tale palace is famous for its 99 towers and 365 rooms, and a large park with centuries-old trees (beautiful photo gallery of the park) and azaleas and rhododendrons (bloom around May). The palace offers different tours (including “an extreme tour” of underground corridors, previously unavailable chambers and a dark crypt), and hotel rooms.

The Castle in Książ, on the outskirts of the city of Wałbrzych 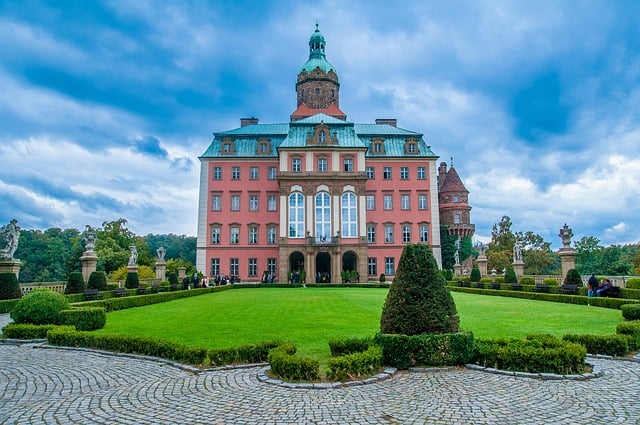 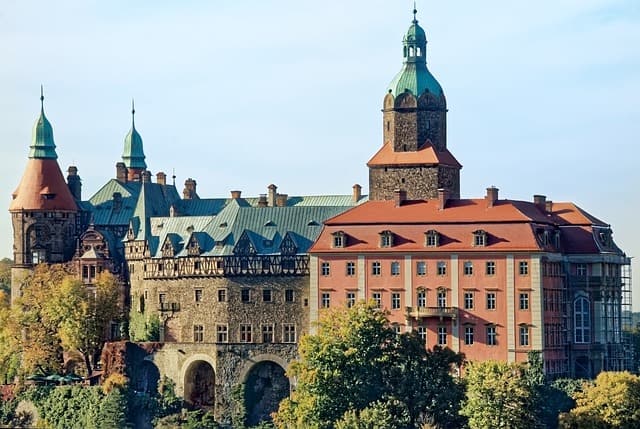 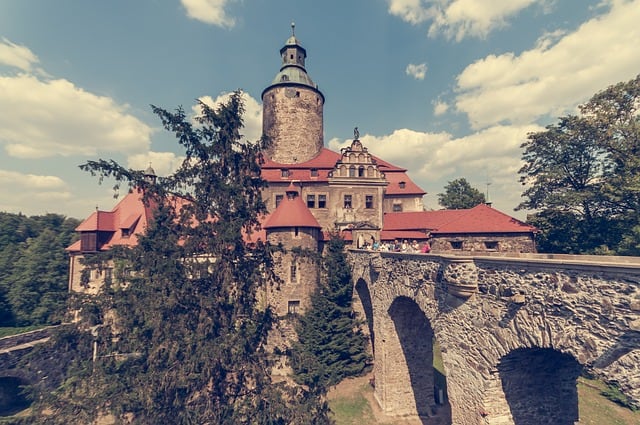 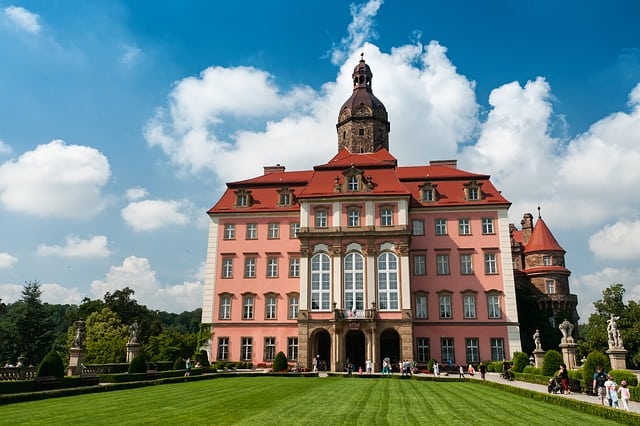 Książ Castle rises picturesquely on rocks among forests, in the heart of the Landscape Park. It’s a huge building – it is estimated that it is the third-largest castle in Poland after the Malbork castle and the Wawel castle in Kraków. The history of the castle dates back to the 13th century, it was rebuilt several times (the last time by the Nazis during the Second World War who bored tunnels 50 meters below the castle), which can be seen in its eclectic architecture. The castle offers hotel rooms and 14 tours, including a one-and-a-half km underground route and the castle by night tour. 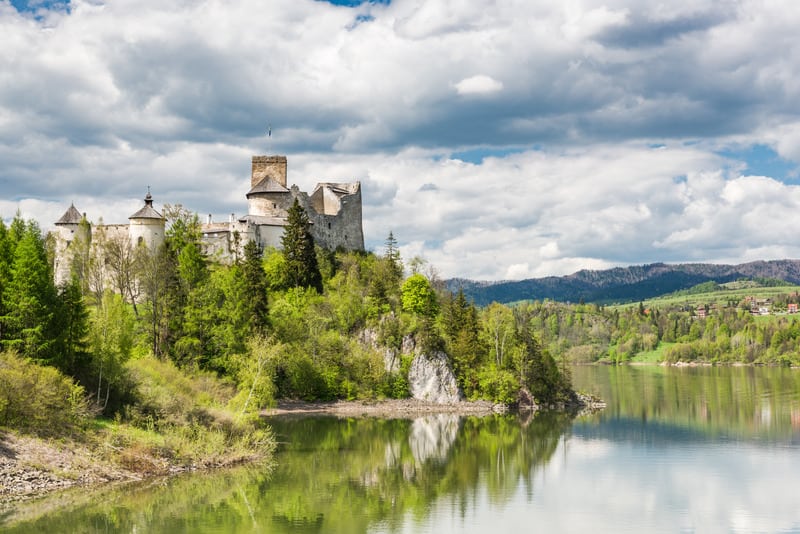 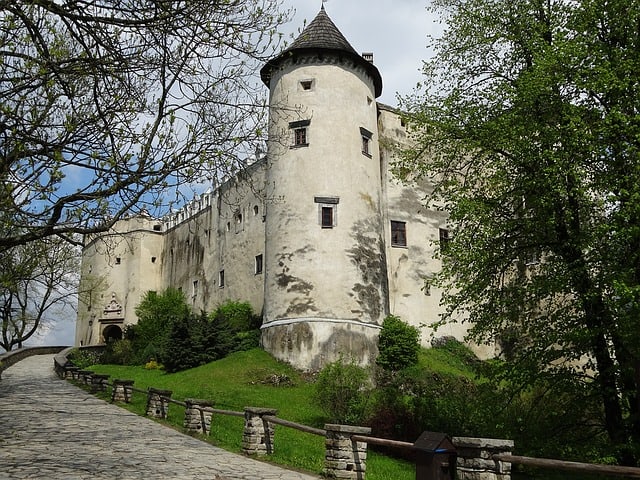 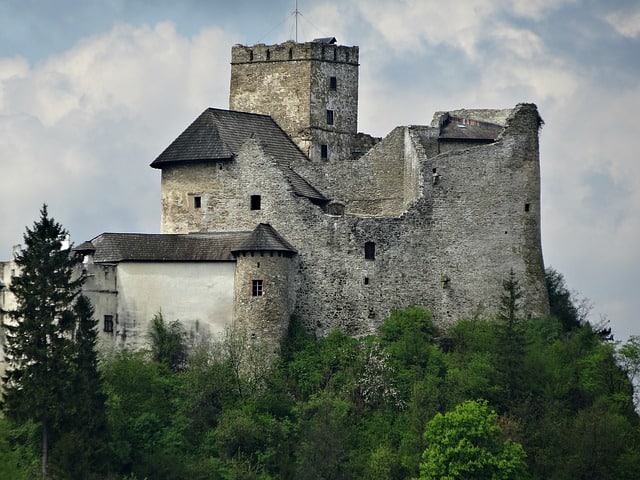 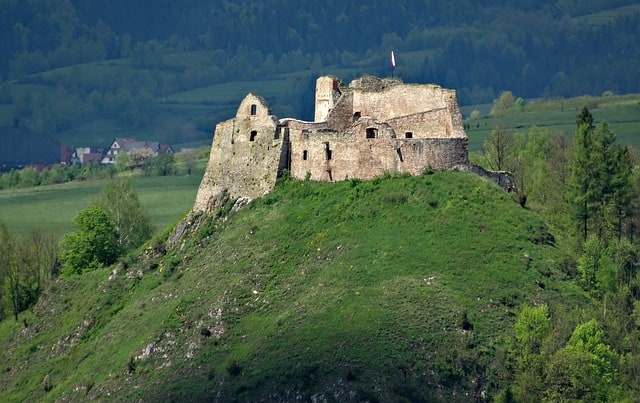 Czorsztyn Castle (magnificent ruins of the castle from the fourteenth century) and Niedzica Castle (Zamek Dunajec) are both located on the shores Czorsztyńskie Lake (Jezioro Czorsztyńskie). The lake is beautifully located between the Pieniny Mountains and Gorce Mountains; it’s an artificial water reservoir on the Dunajec River, created by building a water dam in Niedzica town. Both castles are open to tourists, and small cruise marinas have been built next to them so you can enjoy the views from lake cruises (a boat or a gondola). There is also a free guarded beach (Plaża Pieniny) and a bike trail around the lake. 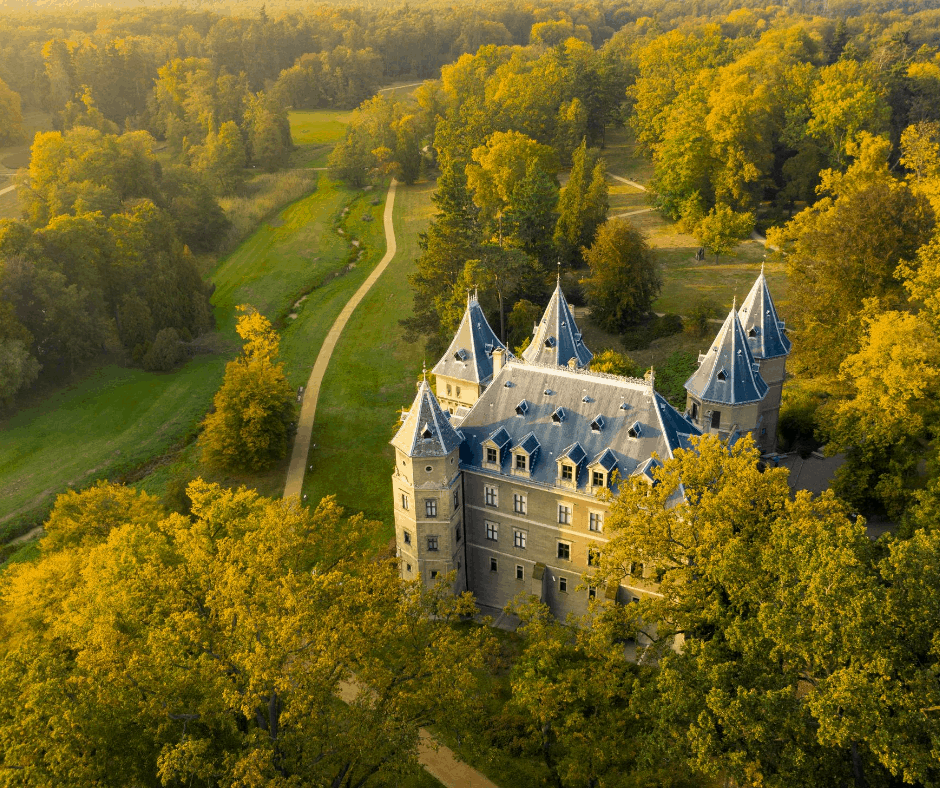 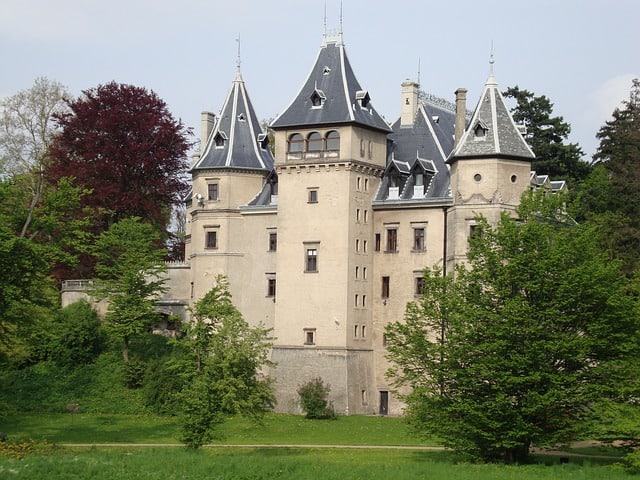 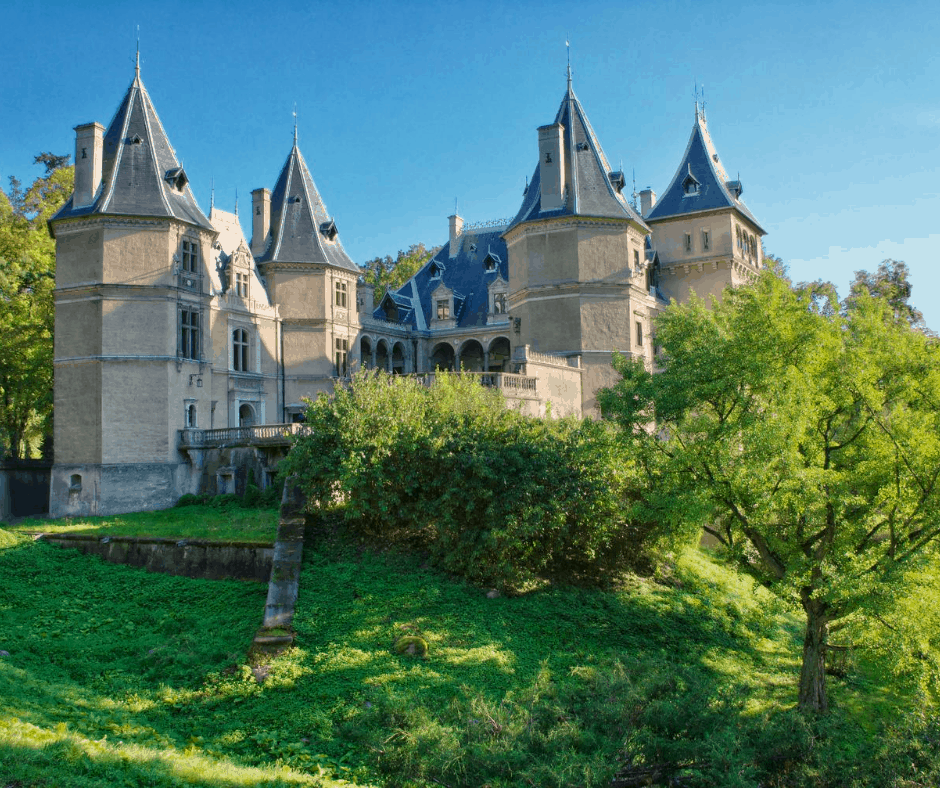 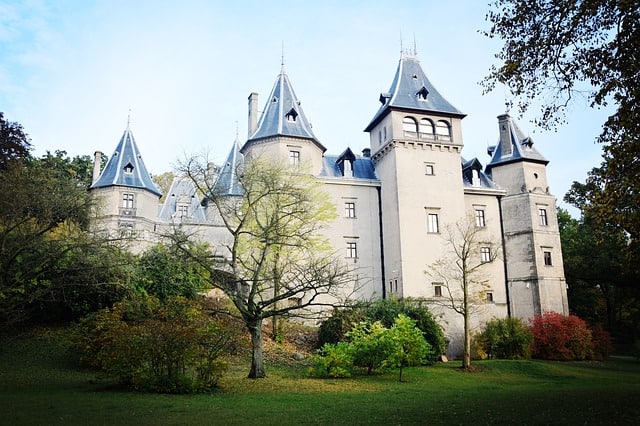 The history of the castle in Gołuchów, rising over the river in the forest area, is over 400 years old. It’s located in a quiet and green area – a nice weekend getaway spot if you appreciate nature and some history. The castle is run by the Poznań Museum and is available to tour. An undoubted advantage of the castle is its location – the enormous park-arboretum surrounding is available to visitors from dawn to dusk (it is one of the oldest and largest gardens established in the English style in the second half of the nineteenth century). The park includes demonstration animal farm (open daily from dawn to dusk, free entrance, the farm’s location on Google map, more in Polish). You will find there Polish bison (żubr), Polish ponies, fallow deers, and wild boars.

Subscribe to our monthly newsletters in English to explore Poland and to learn about Poland! Once a month you will receive a Newsletter: ‘Explore Poland with Kids‘. You will find there featured family-friendly destinations in Poland, handpicked events in selected Polish cities, dates to remember and things to do in Poland in a given month: